Moving forwards in the Persian Gulf

Established in 1976, Medscan Terminal Company has its headquarters at King Abdul Aziz Seaport in Dammam, the capital of the Eastern Province of Saudi Arabia. It also operates an inland branch in the Saudi capital Riyadh. Its 350 employees provide logistics services such as inland transportation, customs clearance, freight forwarding, warehouse storage and terminal handling, including 65,000 square meters of storage space. Operating in the second-busiest port in Saudi Arabia, and the largest port in the Persian Gulf, the company is a key partner to a host of customers in the region. 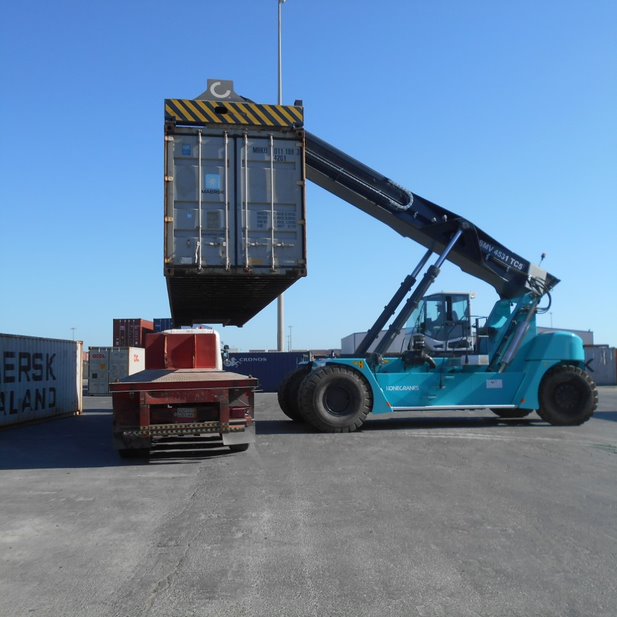 Containers in a tough climate

Such a high-volume port sees a lot of cargo, and Medscan handles more than 4200 TEU per month. The harsh climate can be damaging to some goods, so they need to be stored carefully and moved quickly. As Medscan continues its 44 years of success in the twenty-first century, its lifting technology needs to keep up with the demands of a modern transport hub in a hot desert region.

Due to its durability, reliability and minimized downtime, Medscan has bought new Konecranes equipment regularly over a 16-year period. In 2004, they bought their first Konecranes lift truck, an SMV SL 42-1200 G3 heavy-duty, 42-ton forklift with a gantry spreader. In 2006, again they bought the second Konecranes lift truck with model SMV SL 42-1200 G3.  They were so impressed with its performance that four years later, they got a third one. In 2008, they added an SMV SL 42-1200 G4 forklift to their growing fleet. In 2012, an SMV 4531 TB5 Konecranes reach stacker gave them more storage space, as they could now put five 45-ton laden containers in a single stack. At the beginning of 2020, they took delivery of an SMV 4531 TC5 reach stacker - the TB5 upgrade, which can also lift up to 16 tons, three rows deep. In total, they now have five Konecranes lift trucks.

“The port runs 24 hours a day,” says Hussain Ayesh Abdullah, General Manager of Medscan. “It’s a high-stress, high-pressure environment, and we have to move our customers’ freight fast. The reliability of the Konecranes equipment has made all the difference, because it means we don’t need a spare unit always standing by in case of breakdowns. This helps us to maximize equipment utilization and turnover, tighten schedules and lower operating costs.”

They are also very pleased with the way Konecranes provides high-quality sales and service locally through Saudi Arabian distributor Al-Iman for Contracting and Trading. Expert technicians can be contacted fast, quickly moving on-site if required.

Technology for environment and efficiency

In addition, they will build further efficiency into their operations by retrofitting their fleet with TRUCONNECT Remote Monitoring in the near future, which aids fleet management by following lift truck use to plan driver training and anticipate preventive maintenance needs.

“Our Konecranes lift trucks are the perfect fit for our requirements,” says Mohammed Siraj Khader, Sales and Marketing Officer for Medscan. “High reliability means limited need for service call-outs. Our environment and productivity needs are met. And even on our older models, Konecranes keeps improving their technology. We had our entire fleet retrofitted with reverse cameras and last ones with weight scale system as well, to further boost their efficiency and safety.”

With their dependable, long-lasting technology, Konecranes Lift Trucks is helping to build strong business and expand trade in the Persian Gulf.